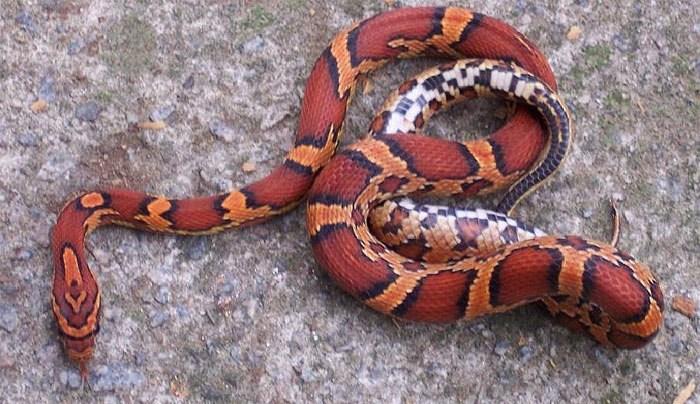 A surprise visitor to the maltings on 14th March was a Corn Snake, discovered in one of our malt stores. This North American native is renowned for being very docile, reluctant to bite, and easy to care
for, and so a commonly kept pet snake. It must have escaped, but where from? A local residence, or was it hiding in a recent delivery?

Staff member Mark Young was swift to react and catch the interloper safely, before taking it to our local Veterinary Surgery in the hopes they might be able to identify the owner. But, very quickly, the story went viral, and every local newspaper and radio station was ringing up, to report on our find. However, we should update you on the outcome of this story.

Unfortunately, there is no final outcome so far, but “Sid” is now in a better place than our Malt Store. “He” is now in the care of ‘Just Snakes Rescue’ at Bradford on Avon. We are advised “Sid” has settled well, and just started eating again, and the Rescue Centre are waiting for “him” to shed “his” skin, put on a little weight, before trying to find a new permanent home.

Warminster Malt in the USA

In early April, we “crossed the pond” to attend the biggest Craft Brewing Convention in the world, in Denver, Colorado. Over 3 days, in the order of 16,000 delegates attended, mostly from North America and Canada, but also from all over the world.

Hosted  by  our  American  agent,  whose  trade  stand  was  serving  (free to  delegates)  a traditional ‘porter’ brewed from Warminster Malt. This proved to be an irresistible attraction to visiting brewers, particularly at 11.00 o’clock in the morning!

The Craft Brewing sector is still enjoying positive growth across the US (4-5%), with strong support for traditional British beer styles, IPA (India Pale Ale) in particular, with an extraordinary enthusiasm for authentic raw materials. We are talking about English, so called ‘Maritime Malts’, and if these malts can also be made in the traditional way, i.e. ‘floor made’, as at Warminster, so much the better. US brewers recognise that this all costs more money, but, it seems, they are more than happy to
pay. They take a particular pride in their products, are very keen to accentuate flavour, and not just from the hops! Would that some of their UK counterparts were similarly focused!

Warminster Malt Behind the Headlines

The highly influential ‘The Grocer’ magazine, reporting on the William Reed food shows at the NEC in Birmingham in early April, described no shortage of “ambition and innovation” amongst the new food and drink products on show. But, according to ‘The Grocer’, one product in particular stood out as having real potential to take on the big players in its category.

London’s ‘Small Beer Brew Co’ (SBBC) showcased its new range of low alcohol beers (1 – 3% ABV). Apparently, their stubby bottles and minimal but cute branding caught everyone’s attention and ‘The Grocer’ remarked, “the beers are delicious, in stark contrast – in taste and aesthetic – to much of the lower alcohol fare on the market”. Are we surprised? No, of course not, SBBC’s beers are all made from Warminster Malt!

Then on April 10th, ‘Country Life’ published an article entitled “There’s English whisky in the jar”. This piece, written by Rupert Ponsonby, sought to highlight that “amazingly, England now has more distilleries than Scotland, according to HMRC, with 166 distilleries compared with 160 in the burnished north”.

A dozen or so only of England’s distilleries were brought to readers attention, for their whisky in particular, including ‘Bimber’, ‘Cotswold’, ‘Dartmoor’ and ‘Isle of White’ Distilleries. All of these begin their magical process with Warminster Malt.

There you have it, two reports that illustrate the high profile our customers are able to command. Since Malt is their most important ingredient, it all suggests we must be doing something right!

Warminster Malt Alongside the Football

The fortunes of Warminster Town (sponsored by Warminster Maltings) have been very much on the ‘up’ since Christmas, and in their last 13 matches (since February 16th) they have only been beaten once. On Saturday 27th April, they finished the season with a flourish: in their last match of the 2018/19  campaign,  at  home,  in  a  vigorous  and  hard fought  contest  (I  was  there!)  they  beat Chippenham Park 3-1. This promoted them to sixth place (out of 20) in the league. Not only that, they now qualify to compete in the hallowed FA Cup! When they get drawn against Manchester United we will let you know!

Back to this last season, it was a very fine conclusion, and a complete turn-around from the previous one. When we took on this sponsorship, Warminster Town had only narrowly avoided relegation from the Toolstation Western League, and were struggling to average 90 spectators at a home match. For all that, we were full of great expectations, and besides, Nathan Ball, the teams’ “very safe” goal keeper, had joined the Maltings staff. So, not only has the team climbed up to the top end of the league, the ‘home gate’ has risen to an average of 124 spectators, peaking at 237 on Easter Monday.

Of course, we would like to think it’s partly about our beer “Maltings Gold” which is not only emblazoned on the players shirts, but also is selling well across the clubhouse bar. And perhaps we can, because Warminster Town’s formidable performance has earned them something of a reputation across the league, and they are now known as “The Malt Men”, the team everyone else is now desperate to beat!

This  new  nickname for the team is an unexpected but very satisfactory consequence of  our sponsorship deal, which continues for another two years. Now, Warminster Town are not just advertising our beer, but they are giving oxygen to our role as Maltsters!

Malt, forever the overlooked, if not unrecognised, vital ingredient of beer: maybe “The Malt Men”, as they thrash their way around the West Country, maybe they could be the stimulation of a wider appreciation of the real heart and soul of a good glass of proper ‘amber nectar’!

Finally, on Friday evening, May 3rd, I was invited back to the Weymouth Street clubhouse to present the annual awards to the players: the under 16’s, 16-18 year olds, the Reserves, and the First Team itself. The club was packed, and vibrating with an air of triumph. In my brief address, when I referred to “The Malt Men” a great roar went up.

But the man who deserves the most congratulation for the success of the club is the chairman, Pete Russell. He works tirelessly for it, maintains control and gets things done, all by volunteers. Pete views it as a Community Project, and it is an outstanding example, with a capital “C”. The under 16’s all aspire to playing for the First Team another day, and all their parents were there to support them. 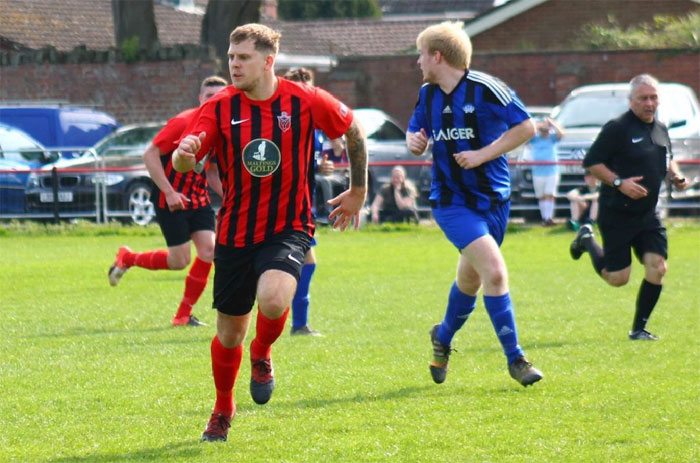 Cream Teas in the Garden

We will continue to serve our popular ‘Cream Teas in the Maltings Garden’ this summer. Just to remind you,  every second Wednesday afternoon, 2.00 – 4.00pm, June to September.

I will look forward to seeing some of you there.