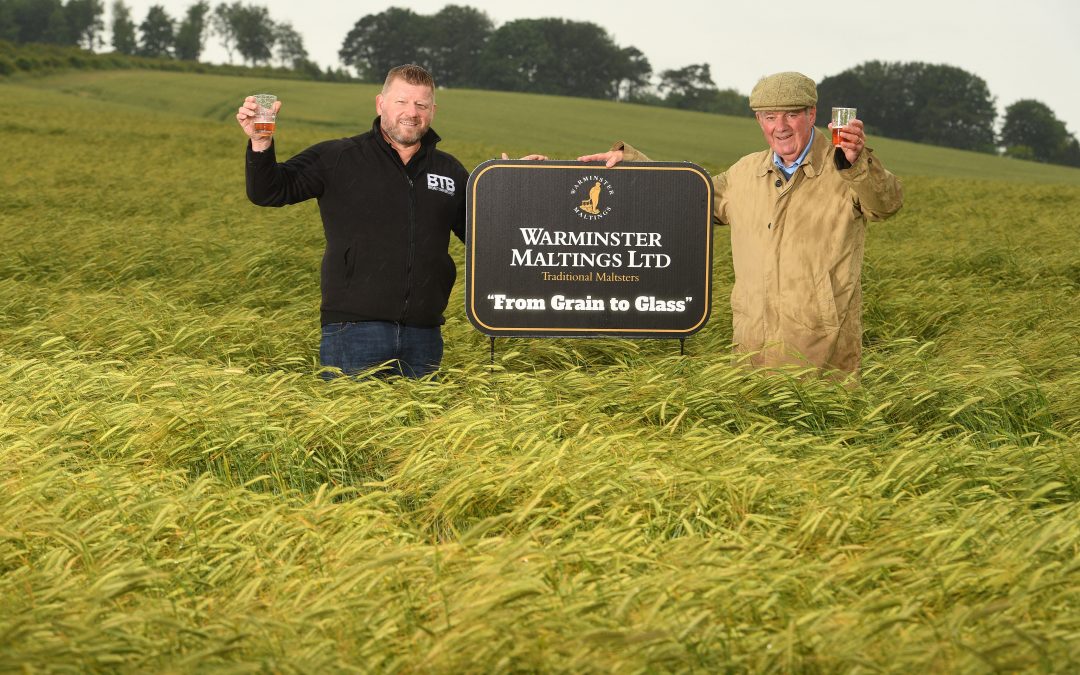 It’s That Time of Year, Again

I am back out on the road, engaged in a busy schedule over 4 weeks of visiting farms with Brewing and Distilling customers to inspect barley crops which are destined to become their bespoke malts later this year. I began on ‘the longest day’ (June 21st), up on the Marlborough downs, in the pouring rain!

I am with Jason Bayliffe of Broad Town Brewery – his brewery is just 3 miles away – and we were inspecting a particularly good crop of Maris Otter barley, which will hopefully become Jason’s base malt from October onwards.

Jason says when his customers learn that his beer is brewed from barley grown just beneath Hackpen Hill (the adjacent landmark), he expects his beer sales to treble!

This photograph was taken by Russell Sach, a freelance photographer who agreed to shadow me to some of these locations – Russell supplies some of the broadsheet newspapers and high profile periodicals – with a view to capturing images of the “grain to glass” supply chain.

Our friendship with Russell Sach began at the end of May, when he rang us, urgently requesting a picture of our maltsters at work. He said the editor of The Daily Telegraph wanted a picture for the weekend.

The photograph was taken on the Friday afternoon ahead of the Spring Bank Holiday, and we were led to believe, it was for the main paper on Saturday or Sunday, possibly complimenting a story about the state of the Hospitality Sector. 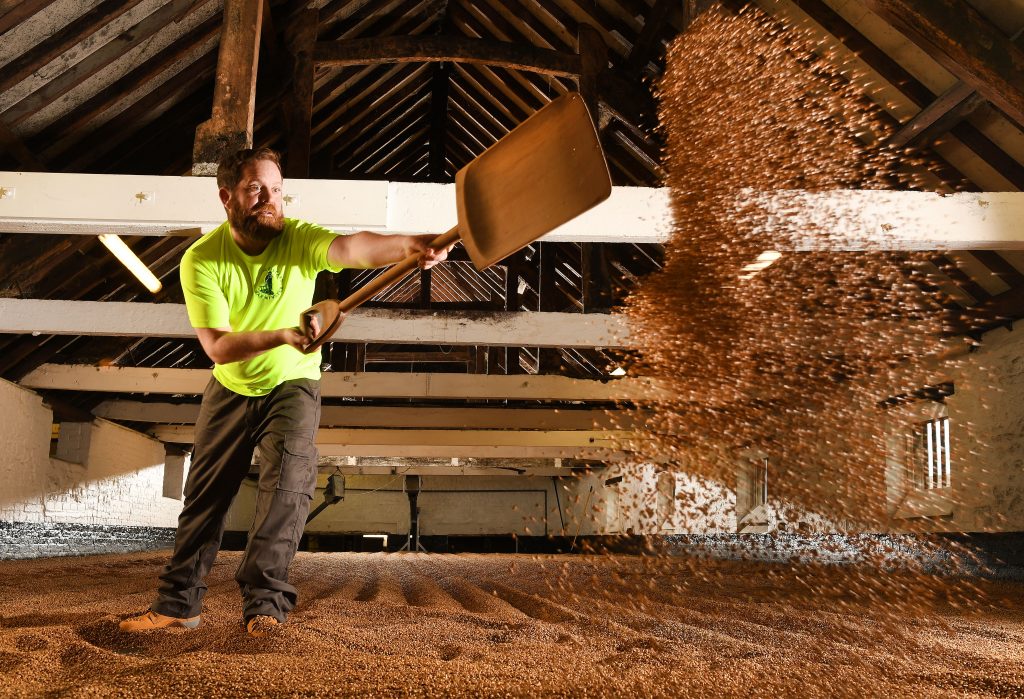 But instead, we ended up in the Business pages on the following Tuesday, June 1st. Readers might have wondered what we were doing there: were we the subject of a takeover (emphatic ‘No’), was the U.K. malting industry the beneficiary/victim of some new trade deal (not that I’m aware of). Our picture was just that, a lone picture. But the caption was false.

It claimed we had closed the Maltings during the pandemic, the first time for more than 165 years. Not true! We ceased production in 2020 for four weeks, simply because our malt bins were all full. But we never closed, we maintained deliveries to customers every week. So, in case you saw it, I would like to put the record straight.

Much More of a Story! 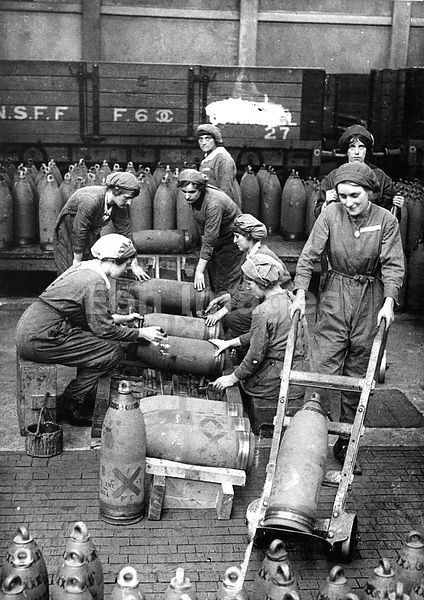 One of our customers, Alison Davis of Carlisle Brewing Co., did better than a broadsheet newspaper. Alison made it on to BBC Radio 4’s “World at One” news programme on May 18th.

This was a story directly connected to the Hospitality Sector, but it goes right back to The Great War (WW1) and 1916.

What happened then, apparently, and particularly in Carlisle, and what the BBC was now alluding to, in the face of adversity, would there be an overreaction by the public when they are allowed back into the pubs without restrictions?

Back in 1916, just up the road from Carlisle, at Gretna, was the largest munitions factory in Europe, where the employees worked especially long hours, but were particularly well paid. So at the weekends, they all escaped down to Carlisle, pockets bulging with “loads of money”, rammed all the pubs to the rafters, and had such a wild time that they both shocked and frightened the residents of Carlisle.

When the workers returned to Gretna, on Monday morning, they all had shocking hangovers, and they were handling high explosives! The Government found it absolutely necessary to step in.

So the Government embarked on an extraordinary social experiment they called “The State Management Scheme”, specifically for Carlisle, whereby the Civil Servants took over the running of Carlisle’s breweries and pubs, with the specific aim of reducing the consumption of alcohol.

They began by downgrading the strength of the beers, and then, with the help of renowned architect Harry Redfern, they redesigned the pubs, including Carlisle Brewing Co’s very own ‘Spinners Arms’, so as to reduce consumption by creating smaller spaces where they also introduced pub games (Dominoes, Shove Ha’penny, and Darts).

Clearly what the BBC was questioning when they invited Alison on to the programme, was the chances of this happening all over again, when pubs return to normality – the freedom to drink at the bar, and no limit to party size. Well, bring it on, I say, and free of any further ‘state intervention’ please, because the next morning not many of us, hangover or no hangover, will be going to work in a munitions factory!

We keep shouting about this, because there is no question about it, we are making better and better malt. What is more, both our established customers, and new customers, are independently confirming this with their own observations and tributes.

Quite apart from being even more selective in the barleys we are taking in, we have also re-introduced a number of early 20th century techniques when ‘floor made’ malt reached it’s peak of perfection and industrial scale production. Let me describe x5 of the changes we either have made, or are in the process of making.

1.) ‘Stepping the Steeps’ – as the weather warms up in the summer, we are now changing the timings for putting the barley under water, and even the number of steeps, down from x3 of shorter duration to  just x2 of slightly longer duration. You see, when the water from each steep drains away, and the barley is left “to rest” between immersions, the barley can warm up a lot more quickly than in winter, so we then need to time the steeps to ensure a swifter transfer from the final steep to the germination floor. As we always point out, in the winter we are constantly striving to keep the malt warm, and in the summer, it’s all about keeping the malt cool.

2.) ‘Dragging the Floors’ – we are ploughing the floors more often, at least x3 times during the day, and up to x2 times at night. This helps to maintain a more constant temperature in the ‘green malt’, and optimise ‘modification’. 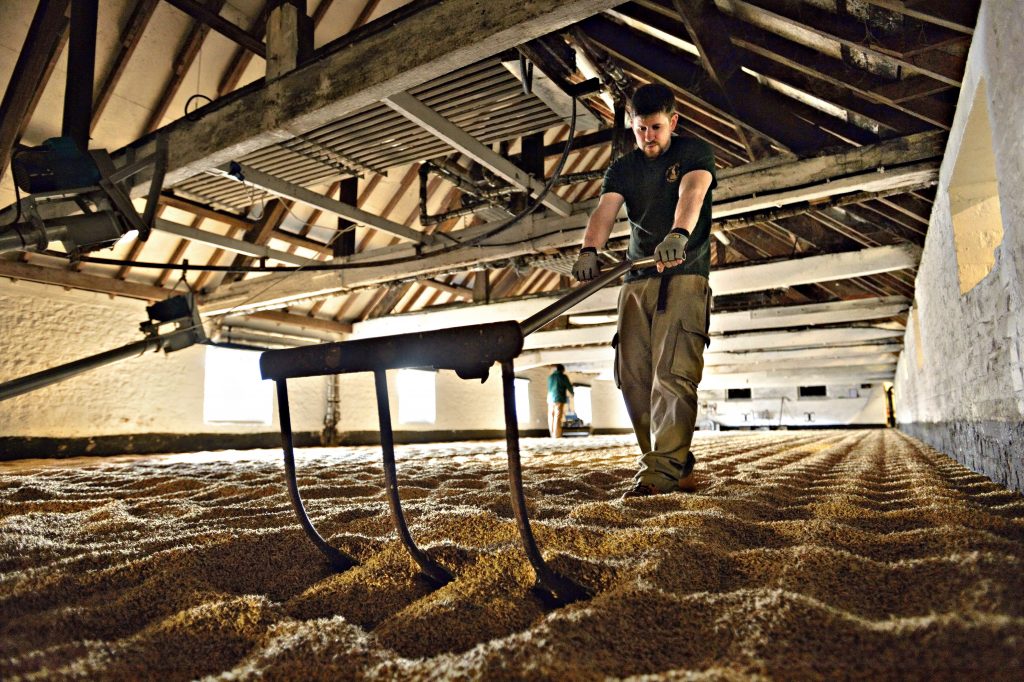 3.) Night Light – when electricity was first introduced into Maltings at the beginning of the 20th century (previously oil lamps), maltsters quickly discovered that leaving the lights on all night on the germination floors enhanced the ‘modification’ of the ‘green malt’. We can all understand this, it’s all about light equals growth! We now not only do that, but we are trialling different lights to ensure we achieve the most benefit.

4.) ‘Thickening Up’ – this is an early 20th century term which entails folding half the germination floor on top of the other half, the night before the ‘green malt’ goes to the kiln. This ensures a more perfect finish to the ‘modification’ process, in order to maximise the extract potential of the malt (volume of beer per tonne of malt).

5.) Kiln Spinner – this is a remotely controlled spinning disc set in the kiln, which was a feature when our kiln was first installed in 1953. This device spread the ‘green malt’ evenly across the kiln floor as it poured in from the overhead elevator, and overcame the necessary tramping by maltsters when they had to spread the ‘green malt’ by hand. Unfortunately it broke down at the end of the 1980’s and was never replaced.

So we have had to design a replacement ourselves, and as we have no illustrations or technical drawings, the project is requiring more than a small element of R&D! But once we can perfect it, we can eliminate the tramping by maltsters, which can, sometimes, impede the early airflow through the malt.

Our Malts now Speak for Themselves!

Everyday, our laboratory analysis confirms the wisdom of our actions. Our malts can now easily match the best of our competitors, if not better them (according to some of our customers). This is despite all the modern technology and intellectual support which the malt factories proclaim. The difference is, every day, we are making our malts with our heads and our hearts!

Finally, I promised to give Edd Mather a plug in this newsletter. Edd is a Practical Brewer and Brewing Historian based in Lancashire, and avid supporter of Warminster Maltings. One of his wide-ranging services to brewers is the Research and Design of Old Beer Recipes with ingredients tailored to clients location. If you would like to enquire further, Edd can be contacted: eddbrewer6@gmail.com

Keep safe and keep on drinking.