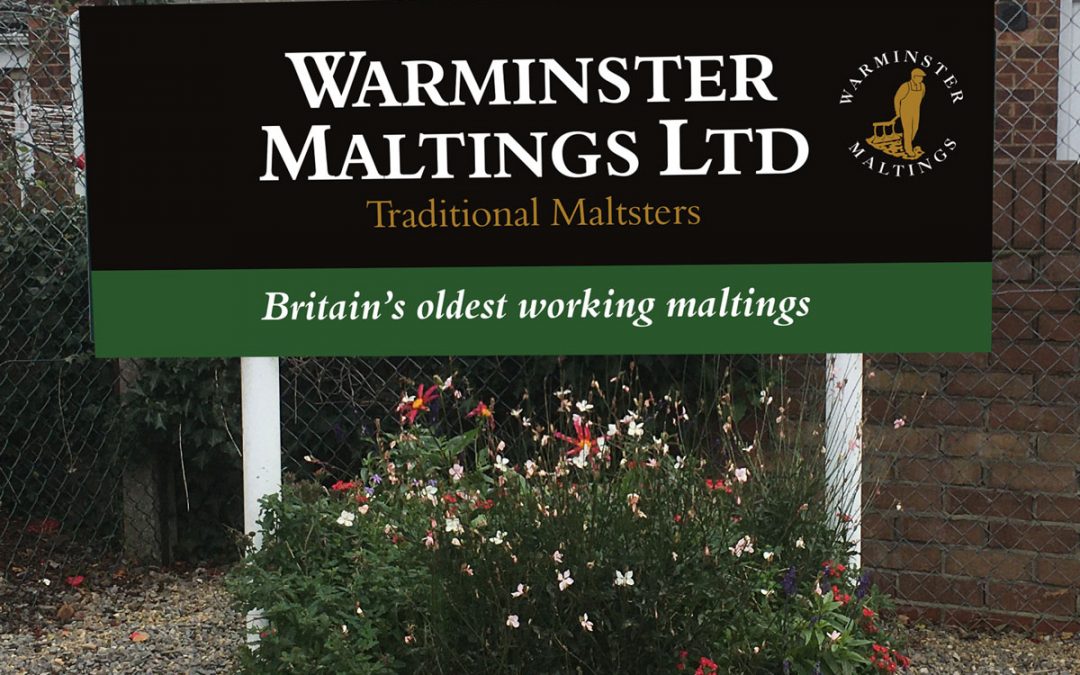 May I begin by welcoming a whole new raft of potential readers – we have added all Warminster Maltings’ customers, both brewers and distillers, to the circulation of this bi-monthly newsletter. I hope they find it of some interest.

This first Newsletter of the New Year (New Decade) is only my second since taking over the manager’s desk, so I suppose, to pick up on politicians parlance, I should begin by reporting on my “first 100 days” in (the) office.

Looking back to those early days in September, at first it was quite daunting, tense, at times bewildering, exciting, and, I am pleased to say, rewarding. At the Maltings I have quite an exceptional team around me, and I am now reassured that, also, I do have an outstanding portfolio of customers, most of whom recognize Warminster Maltings for what it is, and the value of the malts that we make. I am also very lucky that the 2019 harvest delivered some top quality barleys from which we are now drawing all of our raw material going forward.

So what have I/we achieved so far? Well, I believe, in the office at least, we all now understand the numbers and we have costed and created a new 2020 Price List for our Malts. Not only that, we have shared this with all of our customers, mostly via phone calls, in the first instance, and e-mails, securing contracts for the next 12 months. I have visited a dozen customers, just for starters, both distilleries and breweries, all the way from Yorkshire to South Dorset, and I have won a few new accounts. I am also engaging with potentially new outlets in the Czech Republic, Spain, Australia, North America and Mexico.

Alongside all this, we have also tapped into what looks like a renewed interest around the world in Organic Beers. This is coming from some of the major brands, who, perhaps, are seeing this as a way of fighting back over the widely reported findings of pesticide (glyphosate) residues (at very safe levels) in their beers. Warminster Maltings is one of only three UK Maltsters with Organic accreditation.

We are responding to all this support and emerging opportunity by rebadging ourselves to reflect the new era of Warminster Maltings that I and my team now represent. For those who live locally, you will see our new company sign at the entrance off Cobbett Place. This image is being replicated right across all our new publicity material and, particularly, our new website, due to go live on January 17th.

Then, finally, and much to my relief, each month we appear to be recording a modest profit. Our bankers will be pleased!

Some good news from the Office of National Statistics (ONS) at the beginning of December. For the first time in 10 years, at the end of March 2019, there was a nett gain of 320 pubs over 12 months, in the race between pub closures and pub openings/re-openings. This change can be put down to a number of factors, including:

Within the Craft Brewing sector, the Society of Independent Brewers (SIBA) reports a decline in membership, which almost certainly reflects a drop in Craft Brewery numbers for the first time. Many in the industry, particularly those who have been there a long time, will welcome this, as the market place has probably got far too crowded for it’s own good. However…

Craft Beer continues to be the fastest growing category within the Beer Sector! But we must still heed change. When we focus on consumer habits going forward, we now have to kiss goodbye to the ‘millennials’ and instead pitch our forecasts around ‘Generation Z’ (currently under 22 years). We are told this new generation will be drinking less, but better! Mintel, the market analyst, tells us consumer trends highlight growing demand for “genuine products with heritage and provenance, a hand-crafted nature, and trusted values”!

I think Warminster Malt probably ticks all of those boxes!

And then there is… …Probiotic Beer??

Some of you might have spotted this story in the press at the beginning of December. The headline in my paper ran “Raise a glass to the beer that’s good for your gut”. Apparently, researchers on the Continent have discovered some beers that are bursting with probiotic microbes, the bacteria and yeast credited with a host of health benefits.

Of course, we have been here before, back in 2018 (Edition 17) I referred to an exhibit we have here at the Maltings, a Price List from Henry Morgan’s Brewery, Warminster, dated 1883, which advertises their “AK Family Pale” (Ale), at just “one shilling a gallon”, and, interestingly, “…recommended by the Medical Profession for family use”! No doubt there was some substance to that.

So I ran this latest story passed one of our brewer customers for comment. He was very quick to point out that any story that suggested beer was good for your health ran the risk of getting into trouble with the Portman Group, the organization established by the drinks industry in 1989, to ensure drinks are marketed in a socially responsible way. But…
…he went on to point out that beers containing live yeast – draft ale from a cask, and “bottle conditioned” beers, particularly those of a lower ABV – almost certainly imparted benefits for the gut, but strictly subject to modest consumption, of course.

So what is modest consumption? According to my press article of early December – one glass a day! Mine’s a pint.

I am delighted to report that Warminster Town, our local football team which Warminster Maltings sponsor, are not just referred to on the field by their new name, but they are now headlined in the press as the “Maltmen” (Wiltshire Times, 22/11/2019).

And headlines they deserve, because they have been winning quite a lot of their matches of late. Until last Saturday, 11th January, the 4th Round of the prestigious F A Vase. Again they were winning, 1 – 0 for most of the first 70 minutes against Bitton AFC (a whole league above them). But, having played their hearts out, they began to tire, left their defence wide open, and very quickly conceded 3 goals, losing 1 – 3. Never mind, dreams of Wembley will have to be put off for another year, while they concentrate on a strong finish in the league. Long live the Maltmen!

I cannot sign off without quietly pointing out that my other commercial venture, Robin Appel Ltd (grain merchant), has just celebrated it’s 40th birthday. Wednesday, 2nd January 1980, was the start date for what some said was a commercial undertaking against the odds. However, it is one which proved successful, and went on to precipitate my procurement of the rights to Maris Otter barley, which in turn led to my purchase of Warminster Maltings in 2001.

So further reason for celebration this year! And perhaps more next year, 2021, if I can meet the deadline I have set myself to complete the restoration of the Pound Street malthouses. The next and final restoration project is probably the most exciting yet, and it’s all on track, due to begin this summer, so watch this space!

A Very Happy and Prosperous New Year to you all.